By popular demand, the album begins with the first recording of The Robin’s Nest, which is the first piece known to have been written by Vaughan Williams, in his sixth year.

This album largely comprises a selection of tracks from eleven of the recordings issued by Albion Records between 2013 and 2019, including two albums that were nominated for Grammy awards. However, there are seven tracks that are new to CD.  On six spoken-word tracks we hear the voices of Vaughan Williams himself, Herbert Howells, Michael Tippett and Roy Douglas. We learn something of the composer’s musical education, his views on folk song, his working methods, and the affection felt towards him by many of those who were close to him.

Also, by popular demand, the album begins with the first recording of The Robin’s Nest, which is the first piece known to have been written by Vaughan Williams, in his sixth year.

Albion Records specialises in world-première recordings, mainly but not exclusively of works by Vaughan Williams, and many of these have been fairly early works. Despite that, this album features works written in the reign of every monarch from Queen Victoria to Queen Elizabeth II, covering an 80 year span from 1878 to 1958.

Our previous compilation, issued in 2015, ALBCDSAMP Albion’s Vision (still available), set out Albion’s early successes. This new release combines music with the spoken word to trace elements of the composer’s lifelong journey.  Just as Pilgrim (or Christian in Bunyan’s novel and the 1943 radio play) is travelling towards the Celestial City, Vaughan Williams, much influenced by Blake, was on his own journey, in search of a New Albion.  It concludes with the composer talking about the Pilgrim’s battle with Apollyon, followed by our 1943 recording of Christian’s passage through the waters, to be serenaded with Alleluias by the Heavenly Hosts.

The cover is based on an unpublished photograph taken by Ursula Vaughan Williams on their honeymoon in 1953, on the shores of Lake Garda. 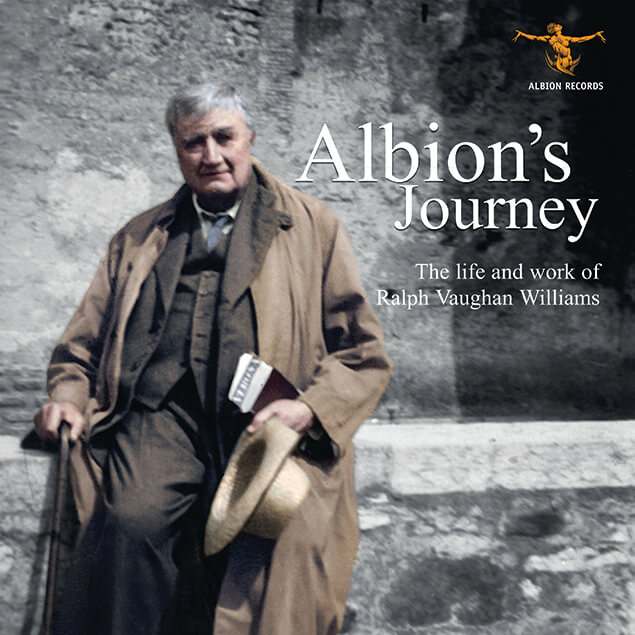 All tracks are by Ralph Vaughan Williams (1872-1958) except for spoken word tracks.