“I’ve always loved carols” Vaughan Williams wrote to Cecil Sharp in 1911. He added that there was “something remarkable and quite unlike anything else about them…..I’ve always noticed what a peculiar atmosphere the major carol tunes have”.

Singing or listening to these carols in the weeks before Christmas can be a very special experience. They touch powerful emotions in us all, reminding us of the innocence of our childhood and – deeper still – on the power and beauty of songs sung by those generations long before our own. Despite radical differences in almost all aspects of our lives compared to these earlier generations, those ordinary men and women, like us, were enthralled by the Christmas message. It is a point of continuity to reflect upon and cherish at Christmas today and at Christmases to come. 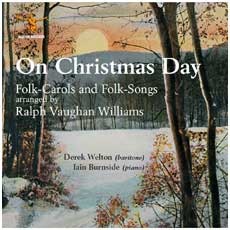 This excellent CD assembles 20 of Vaughan Williams’s own carol arrangements, with six folk songs for measure.The soloist is the young Derek Welton, whose manly, oaken baritone is offset by Iain Burnside’s superbly supportive accompaniments. The ‘Twelve Apostles’ and ‘The Truth sent from above’are particular highlights of this disc,but every track has something to offer.
Highly recommended. Performance ***** Recording *****
BBC Music Magazine
December 2011

Welton is an excellent singer, his vibrant baritone perfect for swaggering nature of some of the songs, while he can scale down tenderly for others.
IRR
December 2011

Vaughan Williams is the focus on a disc spanning his Eight Traditional English Carols, the Six Studies in English Folk Songs and the Twelve Traditional Carols from Herefordshire. Attractively performed by the Australian baritone Derek Welton and the pianist Iain Burnside, the programme makes for an evocative vista of bygone Christmas times.
Sunday Telegraph
December 2011

The eight carols are as follows:

And all in the morning:
The melody and first verse of the text were taken down in Castleton, Derbyshire. The lovely melody, which seems in a subtle way to capture the special atmosphere of Christmas, is reproduced in The Oxford Book of Carols (17).

On Christmas Night:
Well known as the Sussex Carol, this was another tune noted at Monks Gate in Sussex. Vaughan Williams included it in his Fantasia on Christmas Carols of 1912. It is a memorable, beguiling allegretto grazioso.

The Twelve Apostles:
Cecil Sharp included this carol but with a different melody in his English Folk-Carols of 1912 (number X1X). Vaughan Williams’ arrangement was collected in Tipton, Staffordshire. It tells of the betrayal by Judas and the subsequent crucifixion in a gentle, subtle andante.

Down in yon forest:
Also known as All bells in Paradise, amongst other titles, this Derbyshire folk-carol is reproduced in The Oxford Book of Carols (at 61). It has a double refrain and much legendary and mythological content. The ‘hall’ is the home of the Grail and the wounds that do bleed ‘by day and night’ refers to the Keeper of the Grail.

May Day Carol:
Collected in Fowlmere, Cambridgeshire, this is also known as the May Carol and in content can be related to the New Year’s Carol (see track (21)). Vaughan Williams used the plaintive melody in Act 2 of his ballad-opera Hugh the Drover to capture the atmosphere of May-Day morning as the lovers hide in the stocks.

The truth sent from above:
A wonderful, noble melody, noted in Kings Pyon, Herefordshire, used to memorable effect in Vaughan Williams Fantasia on Christmas Carols of 1912.

The birth of the Saviour:
The melody and first verse of the text were taken down by Vaughan Williams in Castleton, Derbyshire. It is known as The Sinners’ Redemption in The Oxford Book of Carols (see number 51). A popular carol, variations used to be printed annually on the broadsides.

Wassail Song:
Collected near Hooton Roberts in Yorkshire, this heartwarming carol tells of the neighbours’ poor children who are seeking charity at Christmas whilst wishing one and all a Happy New Year. It makes a memorable conclusion to this cycle of eight carols.
SIX ENGLISH FOLK SONGS
In 1934, Vaughan Williams had collaborated with Maud Karpeles in the Folk Songs from Newfoundland and he then contributed to a collection of lesserknown folk songs in 1935. This may have spurred him to two more collections, as he arranged the Two English Folk Songs, for voice and violin, and the Six English Folk Songs for voice and piano in that same year.

The six songs are as follows:

Robin Hood and the Pedlar:
Sung to Vaughan Williams in Sussex, it is a folkballad telling of a fight between Robin Hood, Little John and the pedlar – who turns out to be Robin Hood’s cousin. All ends well in this charming andante con moto setting.

The Ploughman:
Collected by Vaughan Williams from in Horsham, Sussex in 1904, this eulogy to the ploughman can be contrasted with another folksong from the same source called The Devil and the Ploughman, included in The Penguin Book of English Folk-songs.

One man, two men:
Also known as The Harvest Folk Song, this Dorset version is simpler than many other editions, omitting references to lambs, ewes and ‘gathering my gold together’.

The Brewer:
This short allegro folk-song is from H.E.D. Hammond’s collection and was noted by Vaughan Williams in Dorset around 1907.

Rolling in the dew:
This well-known and loved allegretto folk-song was collected at Monk’s Gate in Sussex in 1904. Also known as The Milkmaid’s Song, the beguiling theme can be traced back to the fifteenth century.

King William:
Another Dorset folk-song from the Hammond Collection, it is a moral tale of the loyalty of the game-keeper to the King.
TWELVE TRADITIONAL CAROLS FROM HEREFORDSHIRE

In the autumn of 1908, Vaughan Williams was at the Three Choirs Festival in Hereford and took the opportunity to visit Mrs Ella Mary Leather in Weobley. She had requested the meeting, noting Vaughan Williams involvement in the Folk Song Society. Ella Mary Leather had befriended some local gypsies and needed a trained musician to help her note down the tunes to the many songs the gypsies were offering to sing to her. Clearly a woman of considerable charm and tenacity, she was working on a book The Folklore of Herefordshire (published in 1912) and had the foresight to recognise that many of these traditional songs would disappear for ever unless she captured them. Vaughan Williams was joined on this early visit to Weobley by his first wife, Adeline. The three of them would sit on upturned buckets in the gypsy encampments in places like Sutton St Nicholas, with Vaughan Williams noting the tunes and Ella Mary Leather and then Adeline taking it in turn to write down the words, line by line. Many other villages in Herefordshire were visited again, particularly in 1912 and 1913. Through this lengthy process, many settings of lovely folk-songs and carols were saved from oblivion, including variants of The truth from above and the New Year’s Carol.

Sadly, Mrs Leather was to die in 1928, at the age of just 54, having lost her eldest son in the Great War. Vaughan Williams revisited Weobley and the sites of his folk-song collecting, with his second wife, Ursula, and with Gerald and Joy Finzi, in 1956. They paid tribute to the work of the indefatigable Ella Mary Leather and, as he put it, to her power to discover lovely melody in unpromising circumstances. The Twelve Traditional Carols from Herefordshire were arranged for voice and piano and published in 1920. Included in the set are the following songs:

The Holy Well (first version):
A classic ballad-carol, it often opens with ‘As it fell out one May morning’ (see Oxford Book of Carols, 56). This first version is a simple legendary tale, sung to an allegretto melody, collected from gypsies at Sutton St. Nicholas.

The Holy Well (second version):
This second version has a more complete text. It deals with Christ’s forgiveness in a gentle and undemonstrative way to a moderato melody.

Christmas now is drawing near at hand:
Collected from folk-singers at Weobley, this is a lento moderato moralising carol. It is a call to serve the Lord at Christmas, for ‘remember man that thou art made of clay’. This carol was much used by beggars and others at Christmas time.

Joseph and Mary:
Published in 1822 in Gilbert’s Ancient Christmas Carols, this carol has a lovely andante tune also known as There is a fountain. Vaughan Williams and Ella Mary Leather provided an alternative text taken from Sandys’ collection.

The Angel Gabriel:
A joyous ballad-carol, the text is taken from three local sources whilst the allegretto melody is traditional.

God rest you merry, Gentleman:
One of Vaughan Williams favourite carols, this is a story of the nativity which ends with a verse asking for God’s blessing on the Master of the house along with his wife, children and ‘friends and kindred’. The carol has a warm-hearted andante melody.

New Year’s Carol:
Melody and text of this carol were collected from different members of the same family in Herefordshire. It is a cautionary tale for to an andante con moto tune.

On Christmas Day:
Instructed to be sung ‘in free rhythm’, it is a story of what happened to a farmer who dared to plough on Christmas Day.

Dives and Lazarus:
The well-known parable, perhaps one of the most oftrepeated morality tales, is here recounted in ballad-carol style. The melody of this carol made a profound impression on Vaughan Williams who was to use it as the basis of his rich and colourful orchestral work Five Variants of ‘Dives and Lazarus’ , for strings and harp, of 1939

The Miraculous Harvest:
Also known as The Carnal and the Crane, this ballad-carol deals with three subjects: first a conversation between a carnal (or crow) and a crane; secondly the legend of Herod and thirdly the legend of the miraculous harvest. Vaughan Williams and Ella Mary Leather decided to deal mainly with the third subject, taking a few verses from Sandys’ collection. The carol has a gentle, uplifting quality to an andante moderato melody.

The Saviour’s Love:
This short andante non troppo carol extols us to renounce wickedness for ‘Christ will not shed His precious blood again’. The text was taken from Mr C. Bridges of Pembridge and from Mr W. Phillips of Leigh in Worcestershire, with a few additions from A Choice Collection of Christmas Carols (Tewkesbury, 1786)

The Seven Virgins:
The Oxford Book of Carols (43) describes this as a ‘fine example of the way in which a mystical vision is created by the best folkpoetry’. It is a lovely carol and a fitting conclusion to this Herefordshire cycle.