Folk song arrangements for voice and piano or violin

This is the second in a series of four albums recording all 80 of the folk songs in English that Ralph Vaughan Williams arranged for voice and piano or violin.  57 of the 80 songs have not previously been recorded in these arrangements.

This second album has 19 tracks including 15 world premières. It includes Folk Songs collected from the Southern Appalachian Mountains by Maud Karpeles and Cecil Sharp in 1916-1918, arranged by Vaughan Williams with piano accompaniment in about 1938.  Additionally, there are two English Folk Songs for Voice and Violin. A miscellany of English folk songs includes ‘I Will Give my Love an Apple’ and concludes with a ‘Farmyard Song’ which is difficult to perform without collapsing in laughter. Once again, though Vaughan Williams is well known as a collector of folk songs, his own collection by no means predominates.

Simon Heffer wrote of Volume 1 (October 2020) in the Daily Telegraph: ‘Once the new collection is completed, it will be one of the finest monuments Vaughan Williams could have wanted, and a real jewel in the crown of the RVW Society.’ Gramophone Magazine described it as ‘an absolute must’ and The Times as ‘an absolute tonic and delight.’ 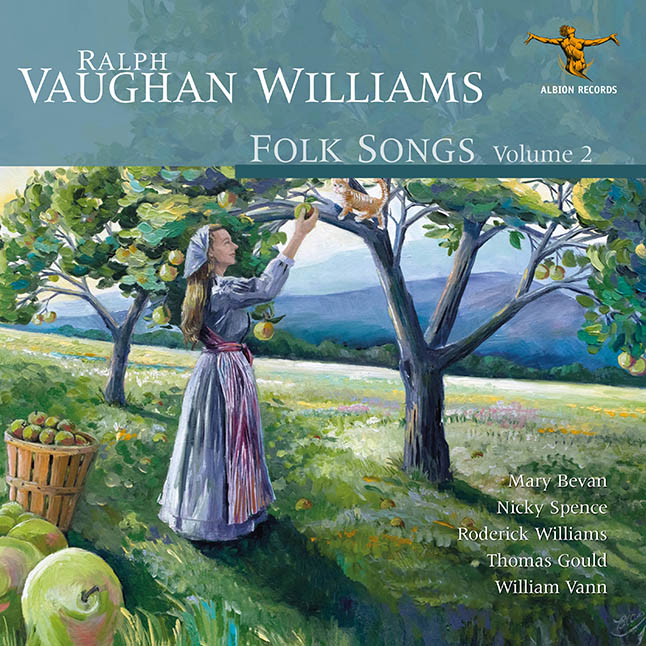 The charisma and charm that oozes and enchants its way throughout Albion’s second collection of Vaughan Williams’s Folk Songs is masterfully delivered here.

Fine British music and choice words combine to produce a finely balanced mix in this recording, which depicts RVW at his folklore best.
……………
These are songs of a distinctive craft which will soothe the hardest of souls, once again revealing  the composer’s passion for this genre, beautifully recorded at Henry Wood Hall, London and Potton Hall Suffolk.

Fundamental RVW at its best.