If you can judge your friends by those with whom you can share good news, then Holst and Vaughan Williams were very close indeed. On first hearing Holst’s Hymn of Jesus (1917), Vaughan Williams said that he wanted to ‘get up and embrace everyone and then get drunk’. After Holst heard A London Symphony on 27th March, 1914 he told Vaughan Williams: ‘You have really done it this time. Not only have you reached the heights but you have taken your audience with you.’ 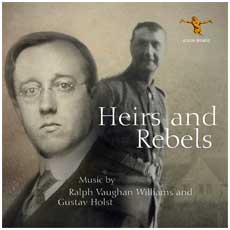 Ralph Vaughan Williams and Gustav Holst were English contemporaries, good friends and great admirers of each other’s music. The album Heirs and Rebels (Albion ALBCD 027) intertwines the two composers via old recordings that show them with traditional roots and their own sometimes subtle early modern tendencies, and a pronounced affinity in how they incorporated traditional folk strains into their work.

The label has nicely remastered recordings from the 78 RPM era, 16 short works in all, nine by Vaughan Williams, seven by Holst, running the gamut from songs, works for wind band or orchestra, choral works and Christmas carols, all showing folk and traditional roots and their own contemporary reworkings.

What strikes one, besides the audio of the time, is how there are sounds that we rarely encounter today, the timbre of the wind band, the rapid vibrato of some of the solo vocals and a certain rootsiness that all seem far away in time for us now. So in that sense this was the music as it sounded then and one presumes the composers found to be right. That in itself is interesting.

But beyond that these are charming examples of the miniatures both could craft so well, performed with spirit and zeal.

This Albion recording was produced under the auspices of the Ralph Vaughan Williams Society.

It is a very diverting program sure to appeal to lovers of Vaughan Williams, Holst and early modern musical Anglophiles.