“It is a well-rounded, harmonious and vivid work. Moreover I have seldom heard anything that is more English. I do not mean that you were influenced by English folk songs but the symphonic grip seems to me to be English”

Jean Sibelius writing to Vaughan Williams on the subject of his 5th Symphony.

This release comprises two of Vaughan Williams’s most celebrated works, with a little-known third, in transcriptions for two pianos by his associates. The composer had a hand in the version of Symphony No 5, and the manuscript has been edited by Anthony Goldstone, half of the husband-and-wife duo performing here. It comes across with a fascinating clarity, well conveying the raw and rapturous truth of VW’s inspiration.  The Tallis Fantasia, though, comes close to an autonomous piece, its rich polyphony captured by the note-intensive medium.
Paul Driver

Curse of the unrecordable symphony
Anyone who sees the Fifth as a reminder of eternal values, a haven of peace in that fretful period between the Blitz and the V1s, cannot be far wrong. To me, it has always seemed a moment of calm in a heightened period of national consciousness.
Until recently I felt that no recording of the Fifth had ever entirely done it justice. But another intriguing recording is available, and in many respects it is the most revelatory yet.

The musical language and a sense of profound English mysticism is clearer and more intense than ever. Those who see a message in the music about eternity, and the literally incomprehensible that lies somewhere beyond us, will hear it unequivocally in the piano transcription (the disc also contains a dazzling performance of a transcription of the equally mystical Fantasia on a Theme by Thomas Tallis). The way the composer lays one texture on top of another does not always come out well in the orchestration: on two pianos, nothing remains unsaid. Having explored Vaughan Williams myself for 40 years, I now for the first time comprehend the true greatness of his Fifth Symphony, thanks to this interpretation: and see that it is very nearly his greatest work of all.
©Simon Heffer

There is a strength here that reveals more than ever Vaughan Williams’ true nature, an underlying grit and power. The music rises to a forceful peak with these two formidable musicians bringing a tremendous authority. Surely the Fifth Symphony is as much a spiritual journey as Pilgrim’s Progress. Certainly this fine duo takes us on a wonderful journey.

The Running Set is an arrangement of traditional dance tunes for orchestra. The arrangement for two pianos was made by Vally Lasker and Helen Bidder.  Goldstone and Clemmow’s playing is full of rhythmic joy as it moves through passages of the most impressive power and fluency. There are some fast and furious passages of terrific virtuosity, a quite incredible pianistic display finding a spontaneity and abandon as the music heads towards the coda.

The opening chords of the Tallis Fantasia set a wonderful scene before Tallis’s theme is presented in staccato phrases. Goldstone and Clemmow move ahead with striking effect soon providing an extra strength as the music rises. They pace it beautifully, allowing an organic growth, often bringing a timeless sense of grandeur. The church acoustic allows the music to expand magnificently, revealing some lovely details, particularly in the slower, quieter sections. When the music soars to the heights as it reaches its peak it is truly magnificent before this duo weave some quite lovely moments in the later stages. Anthony Goldstone and Caroline Clemmow deliver a spectacularly fine performance that soars, shimmers and glows.

This whole disc is a remarkable achievement, superbly recorded at the church of St. John the Baptist, Alkborough, North Lincolnshire, England. There are excellent booklet notes from John Francis and Anthony Goldstone.
Bruce Reader

Much painstaking detective work and considerable editorial expertise went into this first recording of Vaughan Williams’s Fifth Symphony in an early incarnation for two pianos. Fascinating listening it makes, too, its infinitely subtle harmonic palette illuminated to frequently revelatory effect. Lovers of this symphony (arguably the most technically assured and elegantly proportioned of the composer’s nine) should most certainly investigate, safe in the knowledge that RVW’s heart-warming inspiration is marvellously served on this occasion by Anthony Goldstone and Caroline Clemmow.

The experienced husband-and-wife duo lend equally idiomatic and bracingly articulate advocacy to the two-piano arrangement by Vally Lasker and Helen Bidder (who served on the teaching staff with Holst at St Paul’s School, Hammersmith) of the sprightly 1933 dance medley The Running Set.

Maurice Jacobson’s sympathetic reworking of the Fantasia on a Theme by Thomas Tallis was published in 1947, and I’d take these artists’ ideally cogent and passionate view over a goodly number of orchestral rivals. Excellent sound and balance, too, the results always firmly focused and truthful in timbre.

News has just reached me that Anthony Goldstone passed away on January 2, 2017, aged 72. This nourishing Albion release stands as a worthy memorial to his sterling musicianship.
Andrew Achenbach

The duo-pianists Goldstone and Clemmow have succeeded in producing not only the symphonic scope of these three works, but a feat more rare, much of the colour and ebb-and-flow of an orchestral performance. How sad to report, then, that this recording is likely the last new release for the duo, for Anthony Goldstone died on January 2nd 2017 at the age of 72. This Albion disc serves as a most fitting capstone to an extraordinary career.
The music breaths as if played on strings and winds, and the listener would have to strain to find a phrase that could have flowed more freely or a transition which was not seamlessly governed. These are, in short, magnificent performances of these masterpieces, regardless of instrumentation. The pianos’ inherent percussiveness changes the character of the music, but less than expected, not least because the performers play so sensitively. One, in fact, finds new subtleties and touches of genius when attention is concentrated on the inspiration’s essence, as it is here. And when the music needs to ring out, the bell-like tone achieved by artists and engineers creates a most affecting radiance.
This release is a valuable disc. I could not be more pleased that it was produced.
Ronald E. Grames 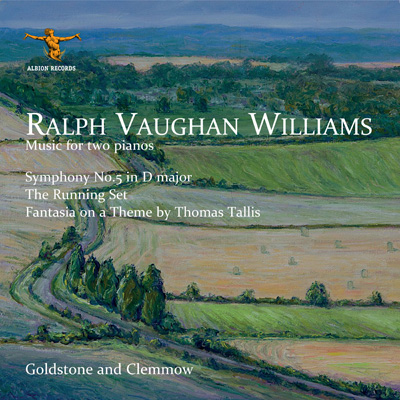 THE RUNNING SET
Arranged for two pianos by Vally Lasker and Helen Bidder.

FANTASIA ON A THEME BY THOMAS TALLIS
Arranged for two pianos by Maurice Jacobson.