This album with five world premiere recordings is the most important of several albums released by Albion Records in 2022 to celebrate Ralph Vaughan Williams’s sesquicentenary.

Pan’s Anniversary or The Shepherd’s Holyday
Margery Wentworth
Peace, Come Away
Too Sleep! To Sleep!
Why Fum’th in Sight
Tallis Fantasia arranged for Voices and String Octet

Stratford-upon-Avon, with incidental music by Ralph Vaughan Williams. At the heart of the music are four great Hymns to Pan for three female soloists, chorus and orchestra. Time was short, so Vaughan Williams delegated some of the dance arrangements to his friend Gustav Holst. The work was performed just once, on Easter Monday 1905 and was reconstructed for this recording.

There are two spoken parts, played here by Timothy West and Samuel West. The soloists Mary Bevan, Sophie Bevan and Jess Dandy are joined by the Choir of Clare College, Cambridge, and Britten Sinfonia under the baton of William Vann. Thomas Gould, the leader of Britten Sinfonia, plays some dances arranged for solo violin, and violin with side-drum.

Peace, Come Away and To Sleep! To Sleep! are two settings of poems by Tennyson that Vaughan Williams wrote when he was a student. They have been orchestrated and edited by the composer Christopher Gordon.

Christopher Gordon also orchestrated Margery Wentworth, a much later setting of poetry by John Skelton dating from about 1934/35. This little gem, sung here by baritone Johnny Herford, was part of a discarded song cycle The Garland of Laurel.

Finally, Timothy Burke made an arrangement of the Fantasia on a Theme by Thomas Tallis for voices and string octet as an innovative lockdown project. This is the first full recording with the choir (of 39) and octet under one roof. The words set in the Fantasia were taken from the English translation of Psalm 65 from Archbishop Parker’s Psalter, the source for Tallis’s original setting, which is also heard on the disc. 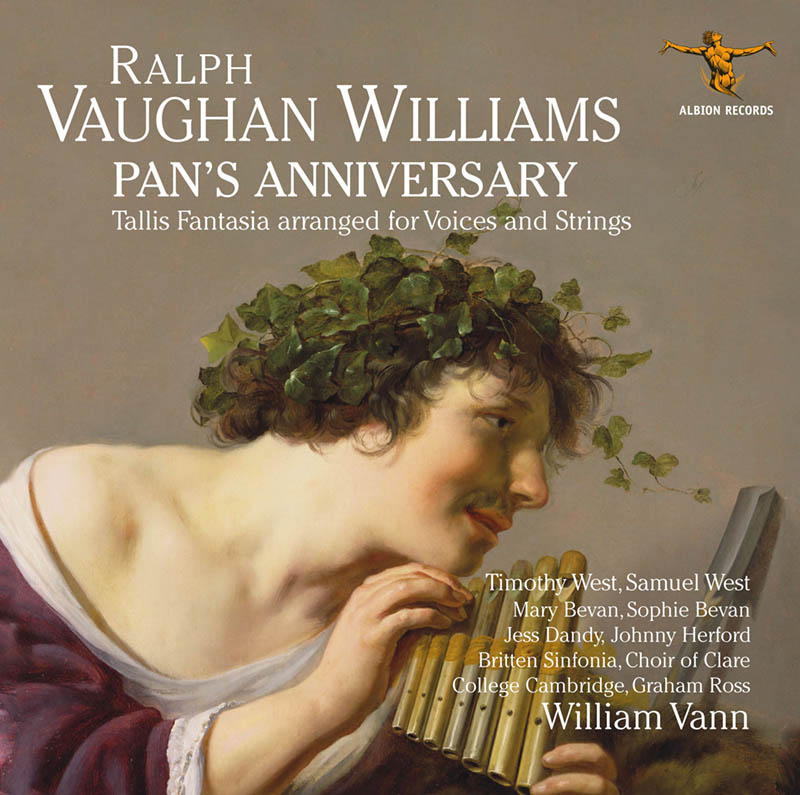 Burke’s vocal scoring with stratospheric sopranos is actually rather magnificent. It made me think of the sun streaming through a multicoloured cathedral rose window!
Alan Cooper
British Music Society

(Preceded by a review of John Wilson conducting John Ireland …)
A greater and more protean British figure, Ralph Vaughan Williams, receives a 150th birthday salute in Pan’s Anniversary, the latest in a plentiful line of Albion albums unearthing his more-forgotten works and arrangements. The titular and biggest item features incidental music from a 1905 adaptation of a Ben Jonson masque, performed with persuasive force, and conducted by William Vann.
But I’ll return most often to a student choral creation, To Sleep! To Sleep!, circa 1896 (blessed with an immediately striking opening phrase), and the album’s finale: a recent arrangement by Timothy Burke of VW’s Fantasia on a Theme by Thomas Tallis, featuring 39 voices from Clare College, Cambridge, weaving wondrously radiant textures above the Britten Sinfonia strings. Most inspiring. (Albion Records)
Geoff Brown
Wednesday June 15 2022, 5.00pm, The Times 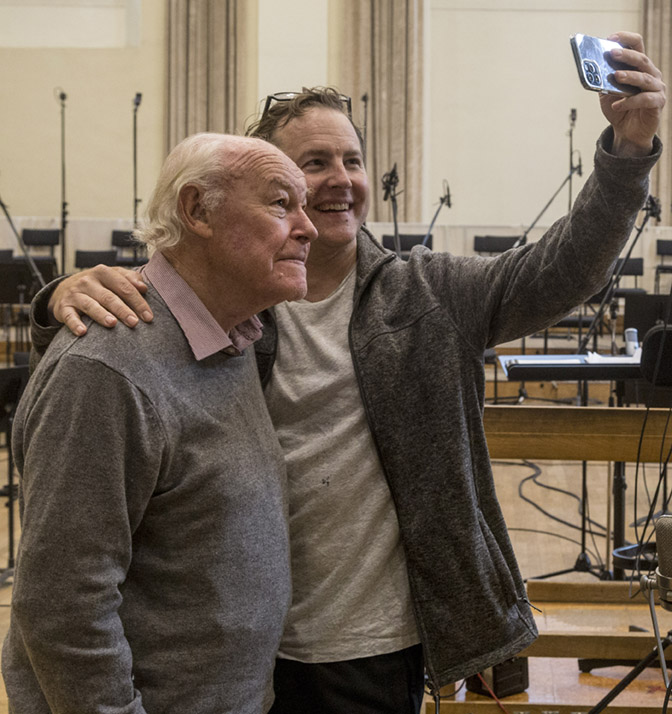 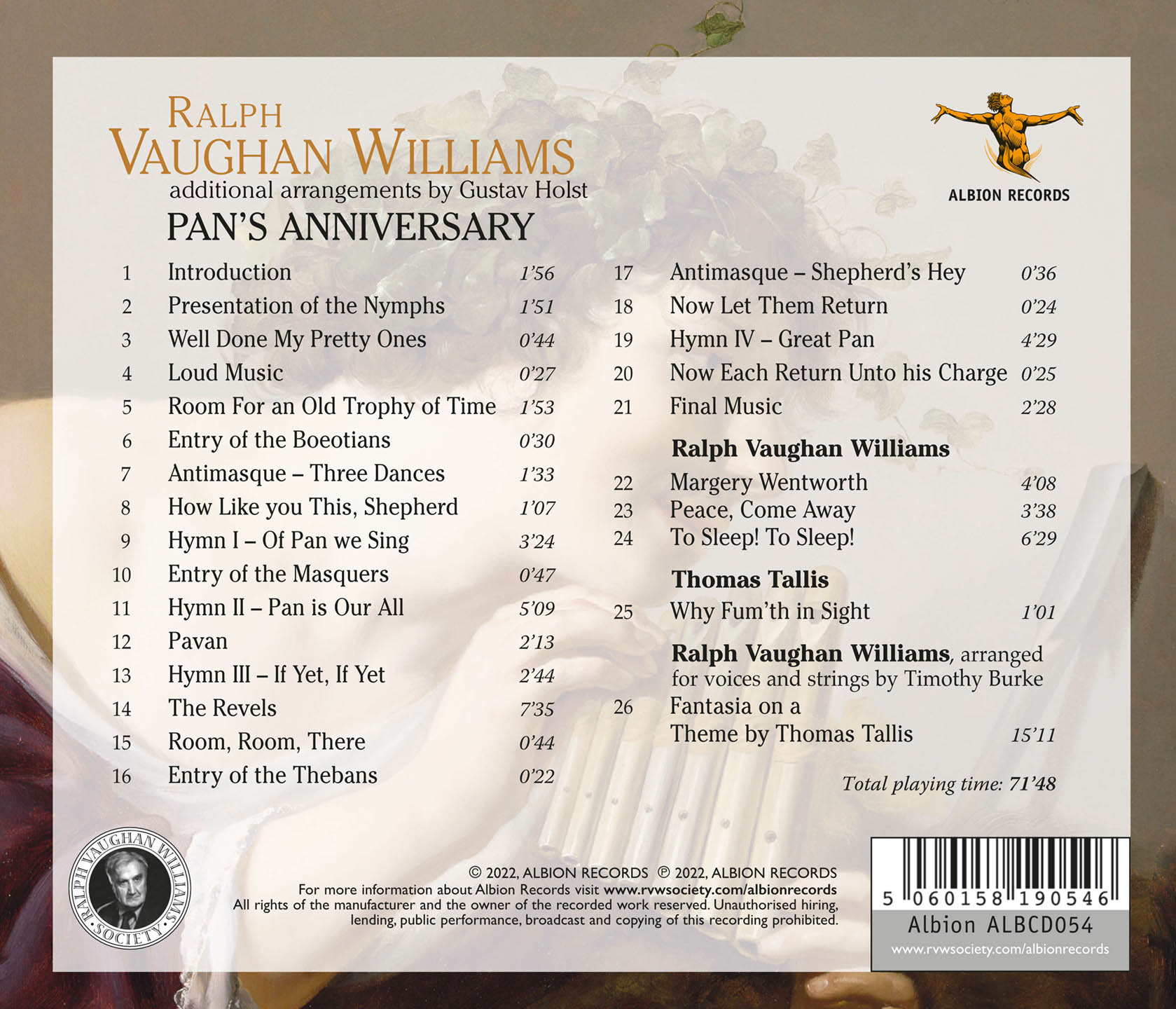