“We are fortunate that Vaughan Williams was able to express his emotions through music, for it resulted in some of the most intensely romantic and beautiful music ever written. This is characteristic of Purer than Pearl, which includes many world première recordings.

From an early age, Vaughan Williams’s “Englishness” brought forth near-masterpieces. Summum Bonum is his earliest extant song; as sung by Spence, with excellent diction, it foretells greatness. Linden Lea is given in Sumner Salter’s rare arrangement for soprano, alto, tenor and bass. Bevan’s How cold the wind doth blow – with Gould’s violin obliggato – is another highlight, and Herford brings a Sullivanesqe patter to Rumpelstiltskin’s Song. Hidden gems all.

Adrian Williams has arranged eight of the most memorable songs and duets from The Poisoned Kiss with piano accompaniment. It is indeed a most gratifying sequence, including such gems as ‘Blue larkspur in a garden’, ‘Dear love’ and ‘The enchanted air’, and preceded here by 14 further examples of RVW’s song-writing gifts. Presented in chronological order, they range from 1891’s ‘Summum bonum’ (a passionate setting of Robert Browning by the 19-year-old RCM student – with a quotation from Tristan und Isolde in the piano part) to the Two English Folksongs for tenor and violin first published in 1935. ‘Linden Lea’ is heard in a mellifluous version for SATB and piano from 1929 by Sumner Salter (1856-1944), and I’m very much taken with the piercingly poignant 1912 setting of the folksong ‘How cold the wind doth blow’ (alternatively known as ‘The Unquiet Grave’). Listen out, too, for those especially imaginative duet treatments of Whitman’s ‘The Last Invocation’ and ‘The Love-Song of the Birds’, as well as ‘Fear no more the heat o’ the sun’ from Cymbeline and ‘It was a lover and his lass’ from As You Like It.

Vocal and instrumental contributions alike leave nothing to be desired – and a special word of praise for William Vann’s deft pianism. Exemplary production values bolster the appeal of these two Albion releases, both of which can be cordially recommended.

‘Purer than Pearl’ contains fourteen songs and duets for voices, violin and piano presented in chronological order; six of them first recordings. It is completed with eight songs from The Poisoned Kiss, newly arranged by Adrian Williams. I can only agree with the statement in the press release, that this ‘is possibly the most beautiful recording Albion has ever made’. Unexpected treasures abound, such as the two folk songs, Searching for Lambs and The Lawyer, simply but tellingly arranged for voice and violin.

Perhaps the most unexpected is Summum Bonum, composed in 1891 when Parry had lent Vaughan Williams some Wagner scores, complete with cribs from the ‘Liebestod’ in the piano part. But the duet to which I keep returning is the Dirge for Fidele, ‘Fear no more the heat of the sun’, for two sopranos and piano: ravishing and irresistible.

The four singers, jointly and severally, are superb, as are Thomas Gould and William Vann, and the recording, made in Potton Hall, Suffolk, is all that one could wish. 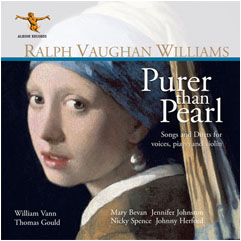