Forgotten Recordings of the 50s

This compilation from Albion records brings a number of première recordings of works by Ralph Vaughan Williams from the LP era to a digital format for the first time.

Recordings of the music of Ralph Vaughan Williams have never been the exclusive domain of British artists and ensembles. Here are recordings of six of the English master’s works recorded in the United States during the decade of the 1950s, three of them premières on disc when they were first released. Sadly, despite the excellence of the performances-the composer made a point of commending one of them in a letter to an admirer-and the rareness of the repertoire, they are little known now except to the composer’s most devoted fans. This latest album from Albion Records returns these recordings to the catalogue in new transfers from the original LPs.

Vladimir Golschmann, a name that will be familiar to collectors of mid-20th-century recordings, leads the Robin Hood Dell Orchestra of Philadelphia-made up of musicians from Ormandy’s Philadelphia Orchestra-in the first recording of the Concerto for Two Pianofortes in C Major with then superstar piano duo Arthur Whittemore and Jack Lowe. Whittemore & Lowe performed the American premiere of this concerto in 1949 and made the recording for RCA Victor the next year. The power of this performance underscores the percussiveness of Vaughan Williams’s writing for the piano and his homage to Busoni’s Bach transcriptions, but captures, as well, the lyric outpouring of the lovely Romanza movement.

The other recordings are by less starry but no less brilliant artists. Robert Hull, then the director of music at Cornell University, counted among the influences on his conducting the tutelage of Pierre Monteux, Eugene Ormandy, and George Szell. His recording of the exotic, impressionistic Flos Campi-the one Vaughan Williams praised-was made in 1952 with his acclaimed Cornell A Cappella Choir and Francis Tursi, long-time Eastman School faculty member and one of the finest violists of his time. A year later Hull led his choir and the Rochester Chamber Orchestra in the first-ever recording of Fantasia (quasi variazione) on the ‘Old 104th’ Psalm Tune, an innovative and stirring setting of the familiar Ravenscroft hymn of praise written in 1949 by the then 77-year-old composer. British pianist John Hull, visiting professor at Cornell and a familiar artist to a generation of BBC Radio listeners, provided commanding virtuosity for the demanding piano solo of the Fantasia. This tribute to the aging composer’s undimmed abilities is accompanied by his earlier, less imposing a cappella settings of three folk songs performed by the Cornell choir. One, John Dory, is another premiere recording. 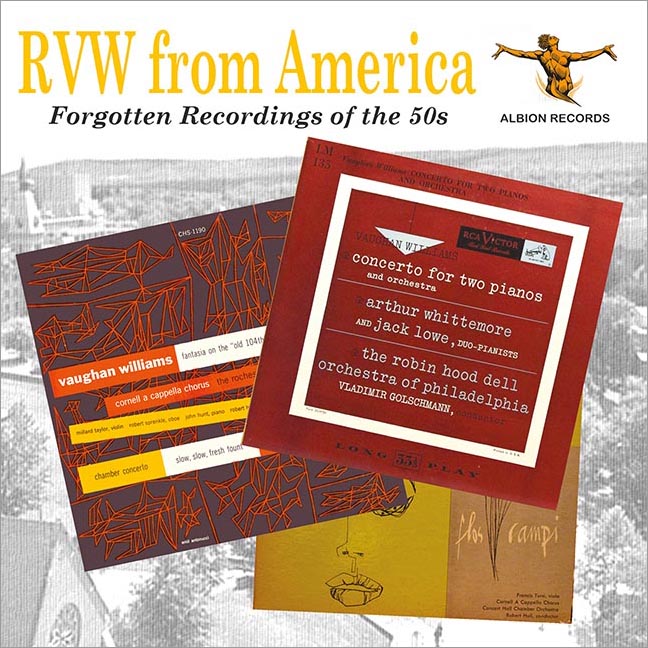 These sensitive restorations of four rare American LPs are performed by three orchestras, but in three cases feature the Cornell A Cappella chorus. The main interest is the recording of the stark, turbulent Concerto for Two Pianos, impressively realised by the Robin Hood Dell Orchestra of Philadelphia under Vladimir Golschmann with Arthur Whittemore and Jack Lowe. Francis Tursi is a haunting viola soloist in a Cornell account of Flos Campi.
Paul Driver
Sunday Times