With this release, the Ralph Vaughan Williams Society continues its eminently worthy labors of bringing to disc rarities of the composer’s output, including world premiere recordings.

Nominated for a Grammy in the Classical Compendium section. 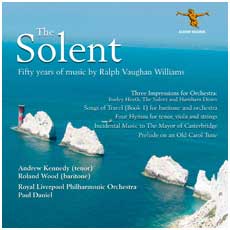 The Solent was the Aled Jones’ Classic FM Album of the week for week commencing 26 August 2013.

“This gem of an album features a selection of rarely heard works by Ralph Vaughan Williams, some of them receiving their first recording. The world premiere recording ofThree Impressions for Orchestra features the title piece, The Solent, that gives the album its name. Reminiscent of Vaughan Williams’ ‘In the Fen Country‘ and also dating from the early 1900s, it’s a delicate, melancholy tone poem.”

‘Songs of Travel Book 1’ is performed magnificently by the baritone Roland Wood, while ‘Four Hymns for Tenor, Viola Obbligato and Strings’ give scope to shine to the tenor Andrew Kennedy and the viola player Nicholas Bootiman.”
Classic FM

A tremendously rewarding and consistently absorbing compendium, this, flawlessly performed under Paul Daniel’s idiomatic direction, and beautifully engineered to boot. A mandatory acquisition for all RVW acolytes.
Gramophone
November 2013

Paul Daniel secures responsive and idiomatic playing from the Royal Liverpool Philharmonic, which is heard to advantage in spacious and wide-ranging sound.
International Record Review
November 2013

Finally, my CD of the year is the recent Albion (ALBCD016) recording of Ralph Vaughan Williams ‘Three Impressions for Orchestra’, especially ‘The Solent.’ I have waited for at least 40 years to hear this work, since reading about it in connection with the composer’s Ninth Symphony. And it is everything I could have imagined. I must not forget the other ‘impressions’ – ‘Burley Heath’ and ‘Harnham Down’, nor the incidental music to Thomas Hardy’s The Mayor of Casterbridge.’  This may not be the most profound music released on CD this year but from my point of view it is the most fascinating. An impressive review by David Barker sets the seal on this disc.
John France
MusicWeb International

With two world premieres – Impressions & Casterbridge – this is a very important release by the recording arm of The Vaughan Williams Society. Often with “lost” works by major composers, one gets a sense of “interesting, but not especially significant”, but here, the second Impression – The Solent – that gives the album its name is Vaughan Williams near his best and a major discovery.

“… this is an outstanding release, and a necessary acquisition to all Vaughan Williams completists such as myself. Highly recommended.”

With this release, the Ralph Vaughan Williams Society continues its eminently worthy labors of bringing to disc rarities of the composer’s output, including world premiere recordings. In this case, the offerings span 50 years of the composer’s creative life, from ages 30 to 80, showing both the continuity and development of his distinctive style. Of the Three Impressions for orchestra that open the set, the first two, titled “Burley Heath” and “The Solent,” were composed in 1902–03, with the third entry, “Harnham Down,” dating from 1904–07. (A fourth member of this set, “Boldre Wood,” apparently has not survived.) As with In the Fen Country and the two surviving Norfolk Rhapsodies, these works show Vaughan Williams’s early and enduring preoccupation with portraying in music the English countryside he so dearly loved. The first two works are not known ever to have been performed, the third was premiered in 1907 (conducted by Emil von Reznicek!) but then withdrawn by the dissatisfied composer, who in his Musical Autobiography of 1950 would say that he felt his music at that juncture had become “lumpy and stodgy” and overly “Teutonic.” The scores have been edited for performance here by James Francis Brown, who also completed a few bars missing from the manuscript of “Burley Heath.”

The three works present a remarkable contrast. “Burley Heath” reflects the composer’s early infatuation with Brahms and does not sound like him at all, though some of the material would be recycled in altered form into the “London” Symphony a decade later. “The Solent” (named for a passage of water between the Isle of Wight and the south coast of England, and here symbolizing fate and the fragile transitoriness of life) opens with an arresting shock: an immediately recognizable melody on unaccompanied clarinet that Vaughan Williams would subsequently use a few years later in his “Sea” Symphony, and then again decades later in both his England of Elizabeth Suite and the Andante sostenuto movement of his Ninth Symphony, followed by strings in open harmonics and modal sequences that presage the immortal Fantasia on a Theme of Thomas Tallis. If the rest is admittedly more ordinary, the whole still constitutes a major step forward from its predecessor. “Harnham Down,” by contrast, illustrates another early Vaughan Williams preoccupation, this time with Wagner’s Tristan und Isolde, which he heard in London in 1892 in a performance conducted by no less than Gustav Mahler. While reflecting the languorous chromaticism of Wagner’s score, it is (despite the composer’s later self-deprecating description) considerably lighter in palette; the greater problem is that it really doesn’t go anywhere and simply dies off inconclusively at its close.

Vaughan Williams composed his nine Songs of Travel, sometimes dubbed “the English Winterreise,” in 1902–04 and orchestrated only the first three in 1905. (His amanuensis Roy Douglas would make matching orchestrations of the remaining six in 1961–62.) Upon hearing these versions, I will hazard a guess as to why the composer proceeded no further with this work: He realized that the richly scored orchestral settings he fashioned are fundamentally at odds with the essentially intimate nature of these pieces. It also does not help that baritone Roland Wood tends to overpower them with a dark, heavy, ample but slightly diffuse voice—not terrible, but a far cry from the wonderfully buoyant fluency of the Anthony Rolfe Johnson version I placed in the Classical Hall of Fame back in 36:1.

The Four Hymns for Tenor, Viola Obbligato, and Strings date from a decade later, between 1912 and 1914, and show the composer having attained to his early artistic maturity. Given the instrumentation (the part for strings is an orchestration by the composer of the original piano accompaniment), it is surprising that this has not enjoyed more recordings in conjunction with the Flos campi and Suite for Viola. In addition to two versions currently in print with the original piano accompaniment (one the classic EMI recording by Ian Partridge), there is one other recording besides this one available of the orchestral version, a superb Hyperion release with tenor John Mark Ainsley. It is to tenor Andrew Kennedy’s credit here that he matches Ainsley for excellence in every way. Nicholas Bootiman is an equally accomplished and expressive viola soloist.
The remaining selections on this disc date from almost 40 years later and are inter-related. In 1951 the BBC approached Vaughan Williams about composing incidental music for a radio dramatization of Thomas Hardy’s novel The Mayor of Casterbridge. The composer, an avid admirer of Hardy’s works, leapt at the opportunity. The opening “Weyhill Fair Song” is an adaptation of a folk song that Vaughan Williams had known since 1912. The three brief instrumental interludes (one of which simply dies away in repetition rather than concluding) reflect the far more craggy and dissonant style of the composer’s final decade, as exemplified by his last three symphonies. Since the music remained in manuscript (it was finally published only in 2010), the composer recycled material from it into his Prelude on an Old Carol Tune. Despite being based on the carol On Christmas Night the Joy-Bells Ring, which Vaughan Williams had first set down on paper in 1904 in his early years of collecting traditional folk tunes, in this guise it sounds as un-carol-like as one can imagine.

Both the Three Impressions and the three orchestral interludes from The Mayor of Casterbridge incidental music receive their first recordings here. As before, Paul Daniel proves himself to be an outstanding, totally sympathetic interpreter of the composer, and the Royal Liverpool is likewise excellent. The recorded sound is a bit up close and will appeal to those who dislike the reverberance of, say, the typical Chandos recording. Full English texts are provided. The total disc timing is mistakenly given to be 57:12; it is actually 60:35. Save for my reservations about the baritone soloist (whose contribution is only eight minutes out of the total), this is an outstanding release, and a necessary acquisition to all Vaughan Williams completists such as myself.

This article originally appeared in Issue 37:5 (May/June 2014) of Fanfare Magazine.
Back to top

INCIDENTAL MUSIC TO THE MAYOR OF CASTERBRIDGE

PRELUDE ON AN OLD CAROL TUNE