The Song of Love

This album includes fifteen world-première recordings and one first modern recording, including six unpublished works. Songs include arrangements of older or traditional songs in both French and German, including the Huguenot Battle Psalm and a troubadour song from the end of the 12th century. There are Three Songs from Shakespeare (not to be confused with the part-songs entitled Three Shakespeare Songs), settings of two poems by the Irish poet Seumas O’Sullivan, and two duets from 1903.

On 2 December 1904 Vaughan Williams promoted his own works at an amazing concert in what is now the Wigmore Hall. Amongst other first performances, The House of Life (a setting of six sonnets by Dante Gabriel Rossetti, including the ever-popular Silent Noon) was premièred by a contralto, Edith Clegg, with Hamilton Harty at the piano. There are many recordings: but all are by tenors and baritones. On this album Kitty Whately has made the first ‘female’ recording of the complete cycle – beginning to redress the balance.
Ground-breaking though it is, we planned this album as an enjoyable recital of beautiful music, and offer it with that intent.

Kitty Whately trained at Chetham’s School of Music, The Guildhall School of Music and Drama, and The Royal College of Music International Opera School. Kitty was a BBC New Generation Artist from 2013-15. She was the recipient of both the Kathleen Ferrier Award and the 59th Royal Overseas League Award in the same year. In 2017 Kitty released her second album, Nights not spent alone, to critical acclaim.

Roderick Williams OBE is one of the most sought after baritones of his generation. Recent and future opera engagements include the title role in Eugene Onegin for Garsington, the title role in Billy Budd with Opera North and Papageno for the Royal Opera House, Covent Garden. His numerous recordings include Vaughan Williams, Berkeley and Britten operas for Chandos and an extensive repertoire of English song with pianist Iain Burnside for both Naxos and Albion Records.

Gramophone, reviewing Purer than Pearl, Albion Records’ 2016 disc of Vaughan Williams song, reserved ‘a special word of praise for William Vann’s deft pianism’. A multiple-prize winning accompanist and conductor, William performs with a host of major singers and instrumentalists across the world. He is also the Director of Music at the Royal Hospital, Chelsea and the founder and Artistic Director of the London English Song Festival. On 3rd April 2019 he made his Royal Festival Hall debut conducting Hubert Parry’s long-neglected oratorio Judith, which he has also recorded for Chandos Records. 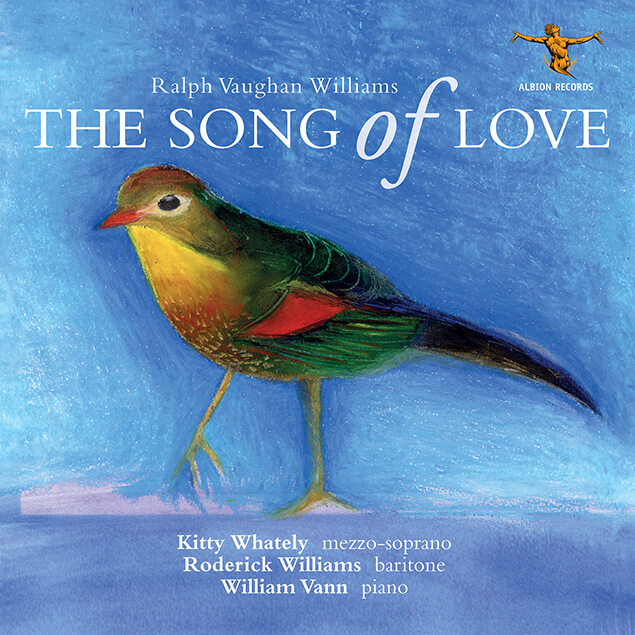 VAUGHAN WILLIAMS
The Song of Love
Kitty Whately (mezzo), Roderick Williams (baritone), William Vann (piano)
Albion ALBCD037
The title is from VW’s Silent Noon, but many of the tracks on this beautifully sung recital — including the first female performance of The House of Life, from which Silent Noon derives — are first recordings. The German and French songs are idiomatically sung by Williams (who enjoys the rollicking Buonaparty), while Whately’s limpid mezzo delights in The Willow Song and the settings from Measure for Measure, Love’s Labour’s Lost and Henry VIII.

When you hear these radiant performances by Kitty Whately you may be as astonished as I was that this is the first female recording of the six songs.
All lovers of the music of Vaughan Williams should seek out this fine disc, not least to hear the revelatory performance of The House of Life.
John Quinn
Musicweb

…Texts and translations are included, and the booklet notes are excellent. An interesting and warmly recommendable recital.

…Whately strikes a sensitive balance between the music’s musing sensuality and the waves of more intense emotion which surface in songs like ‘Love-sight’ and ‘Love’s Minstrels’. In William Vann she has an ideally responsive pianist, who clearly revels in the refined, poetic textures Vaughan Williams summons for his vocal soloist.
Terry Blain
Performance    * * * *Recording * * * * *
BBC Music Magazine, November 2019