Five Variants on Dives and Lazarus
The Lark Ascending
Symphony No. 5 in D major

David Briggs is an internationally renowned organist whose performances are acclaimed for their musicality, virtuosity, and ability to excite and engage audiences of all ages. David is currently Artist-in-Residence at the Cathedral of St John the Divine in New York City.

In addition to his performing abilities, he is renowned as an arranger of orchestral works for the organ, and he has made three new transcriptions of works by Ralph Vaughan Williams for this recording – particularly this new arrangement of the Fifth Symphony, completed in 1943 and celebrated for its connections with A Pilgrim’s Progress.

David is joined by the acclaimed violinist Rupert Marshall-Luck for The Lark Ascending. This was often performed with violin and organ 100 years ago, and this recording is the first modern revival of that tradition.

In 1939 Vaughan Williams wrote Five Variants on Dives and Lazarus, developing a rhapsody around a folk tune that he had known at least since 1904.

The recording, produced by Adrian Lucas, was made on the ‘Father Willis’ organ of Truro Cathedral in August 2021. 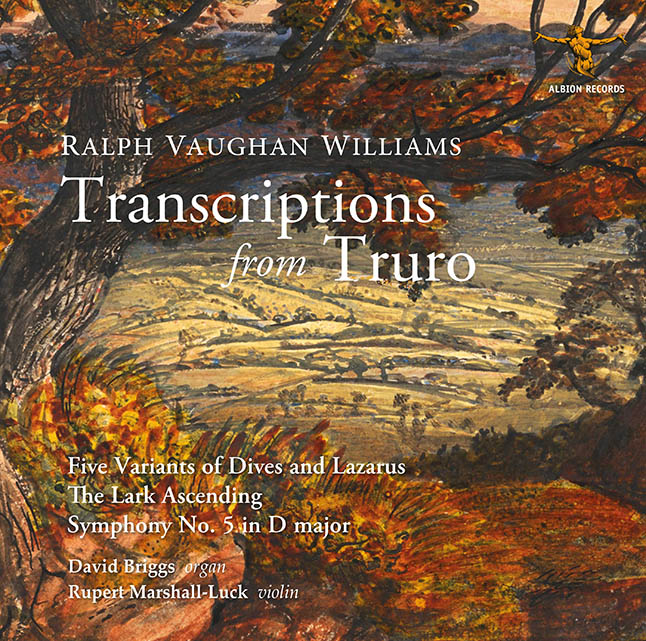 One can tell when music is performed not just with skill, but ardent love, and that clearly is the case here. This wonderful disc should appeal not just to devotees of the king of instruments, but to all lovers of RVW’s music in general; enthusiastically recommended.

Here’s a disc that Vaughan Williams devotees will need no encouragement to explore. On the majestic Father Willis organ of Truro Cathedral, where he was organist from 1989-94, David Briggs delivers expressive performances of his own transcriptions of three seminal works, all ringing true with authenticity. The centrepiece is the Fifth Symphony, the ‘Symphony of the Celestial City’ in Michael Kennedy’s memorable description. Its opening Preludio and meditativeRomanza lend awesome gravity, while the Passacaglia finale is a thing of blazing, opulent wonder. Five Variants on Dives and Lazarus is treated to a glowing transcription played with heartfelt conviction, and Briggs is joined by violinist Rupert Marshall-Luck for an exquisitely realised The Lark Ascending. With excellent booklet notes, this is self-recommending.

Recording made on the ‘Father Willis’ organ of Truro Cathedral in August 2021.